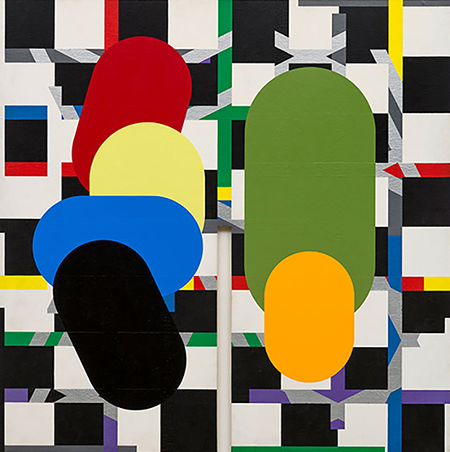 Throughout a five-decade career that was cut short by his untimely passing in 2019, Don Suggs was an incredibly prolific artist who employed many styles and mediums as part of an ongoing exploration of visual language. Although he worked in series and varied his imagery from one project to the next, a recurring tactic among his investigations was his employment of geometric shapes as interventions that can alter or expand a work’s interpretation. For example, in the mid-2010s, he painted colorful concentric circles over black-and-white photographs of landscapes which he explained thus: “the thing that blocks our view (of the landscape) is an opening in the picture to further meaning.”

Such thinking gave birth to most of the works in the current exhibition, which includes five paintings (half the number that he intended) from his last series, which he called “Out of Body” — not because he was interested in the supernatural, but because the new works are actually revised older works that he selected from his overall oeuvre, i.e. body of work. Unlike Lee Krasner, who famously cut up old paintings she no longer liked and rearranged the fragments to form collages, Suggs had no quibbles with his earlier works, which he considered fully resolved. Rather, with the passage of time, he simply believed that he could take them to another level. For example, “Out of Body: Knight’s Tour“ (1974-2018) started out in 1974 as a black-and-white chessboard with color outlines and gray markings relating to all possible moves by the Knight. To update the work, Suggs superimposed a new pattern of brightly colored lozenge shapes over the original composition, obscuring much of it, but adding a more dynamic tone. He also cut out a section of the painting from its midpoint to the lower edge, thereby calling attention to the work’s physical properties and its relationship to the wall.

In “Out of Body: Asuncion” (1981-2018) and “Out of Body: Wood Man” (1982-2018), Suggs overlaid two of his gestural paintings of the early 1980s with evenly painted line and circle configurations, thereby transforming works steeped in Abstract Expressionism into new compositional conversations in which two of the dominant developments of twentieth century art — expressionistic brushwork and flat geometry — compete for attention. In the tall and slender “Out of Body: Proto” (1976-2018), a new energy is pumped into a monochromatic black painting through the superimposition of a yellow circle and three lozenges that are anchored by a single line. The lozenges are spaced at proportionately wider distances from top to bottom. In his last painting, “Out of Body J.T. & R.D” (1984-2019), the artist reiterated, rather than negated the rugged brushwork and black and ochre palette of the original in the two large circles that he implanted over it. The resultant effect is at once startling and mysterious.

In addition to appending his paintings, Suggs also expanded the meaning of a number of his earlier works by digitally layering geometric shapes over photographic reproductions. “Disappearance: Dalton Trumbo” (1986) is a portrait of the McCarthy-era blacklisted screenwriter, in which most of his face is blocked out by a black rectangle listing (in gray) the pseudonyms he was forced to adopt. In “Trumbo Pend” (2016), Suggs used geometry to provide additional information about the same subject. The configuration of two circles connected by a vertical line at the left reads something like a thermometer, moving from red at the top and shifting through gray tones to black at the bottom. Within the context of Trumbo’s history, the red circle suggests the fact that he was accused of being a Communist, while the black could refer to his being blacklisted or the darkness he faced as a result of it. The other added configuration, a blue circle attached to a vertical bar, circumscribes the list of Trumbo’s aliases, thus taking on the function of a magnifying glass.

Suggs clearly enjoyed making what is commonly referred to as “art about art,” and he often relied on his knowledge of art historical precedents as a fertile resource. The intellectual and visceral stimulation that he must have felt when inventing, shifting and revising abstract shapes is especially evident in a never-before-exhibited suite of digital prints in which each work includes the word “Folly” in the title. Although the geometric vocabulary in this series derives from the work of art historical figures such as the Russian Constructivists, Josef Albers and Sol LeWitt, Suggs masterfully hybridized a well-established language to create playful compositions that are uniquely his own.