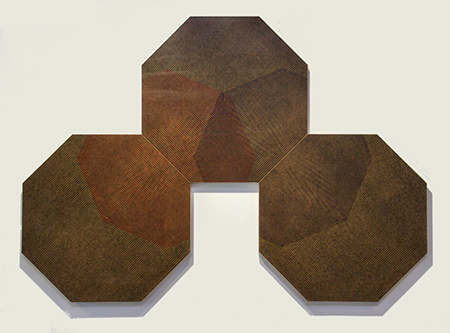 ‘Superposition’ is the placement of one element above another. Think geological strata. In physics, however, the meaning is more ambiguous: the ability of a quantum system to be in multiple states at the same time, but only until measured. Heisenberg’s infamous Uncertainty Principle intervenes: “… we cannot know the present in all detail. For that reason everything observed is a selection from a plenitude of possibilities and a limitation on what is possible in the future.” We can ‘know’ only what we can extrapolate from statistics and probability. Like most of us, Einstein was unhappy with that uncertainty: “[God] does not play dice with the universe.”

But there is yet another meaning for ‘superposition’: the addition of vibration frequencies on a graph, with the bumps and valleys canceling or reinforcing each other, to determine a secondary wave, as the contours of a landscape are the sum of its foundations. Both meanings — the latter empirical, the former verging on mysticism — inform Carrie Ann Plank’s exhibition “Superposition.” Her images are summations of previous occurrences, state succeeding state; but also indeterminate living systems that include all possible states simultaneously.

Art is an arena of aesthetic work/play in which paradoxes and opposites can be reconciled and synthesized. Plank made the twenty-odd pieces included here during the two-year pandemic ‘sabbatical,’ incorporating a variety of source material: electron microscopy, elemental lattice structure, the Russian three-torus model of the universe, and, from Greek mythology, the Gordian knot, i.e., an insoluble puzzle ‘defeated’ by the sword of the impatient Alexander the Great, who had better things to do. Plank’s mixed-media works reflect her printmaking background, employing both hand-carved and laser-cut blocks carrying geometric designs that originated with pencil drawings that were digitally polished before cutting. The geometry relates the works to Constructivism and 1960s hard-edge abstraction, but the muted colors and complex textures wrought by overprinting (itself constituting superpositioning) and sanding (“blood, sweat and tears,” the artist jokes) lend the finished works an aura of becoming as well as being. The fourth dimension, time, is down-sampled into two dimensions.

“Superposition” is a square-format triple torus printed in pale blue over a black background, its multiple overlapping views suggestive of the slow undulations of a deep-sea invertebrate. ”Superposition Form #1” is printed from the same three blocks, printed atop a white background, trimmed around its curving contours, with its donut aperture illuminated by a hidden LED, enhancing the impression of a living organism. The three ovoid woodblocks used for these works are displayed as well, richly patinated by inks and mounted handsomely but without fuss on square wooden matrices, turning them into ancillary, almost accidental artworks.

The three “Position Loop” and three “Superposition Loop” works, both from larger series, are slightly smaller, and printed from the same blocks, in darker and lighter palettes. All three depict symmetrically interwoven tubes comprised of rectangular butted planes suggestive of 3D computer renderings, but transparent. The abstract floral configurations lead the eye in and around unendingly, suggesting both Möbius strips and the mythical snake Ouroboros, which symbolizes infinity by swallowing its own tail.

“Elemental Lattices Octagon Triad Form” and ”Elemental Lattices Octagon Banded Pair” are combinations of two and three octagonal forms, respectively, butted together. These are printed on speckled umber tar paper, which Plank was able to obtain during the pandemic when other materials were unavailable. Unlike the stripe paintings of Frank Stella, which they superficially resemble, the “Lattice” works use overlapping forms and positive-negative spatial complexity to suggest a third dimension, and maybe a fourth.

“Durchsicht Intercession Series #54” makes overt the symbolic, microcosmic aspect of Plank’s work. Durchsicht means to peruse, review or look through. From the glowing white star, with a crystal or flower at its center — a grid on nine squares, rotated 45 degrees — radiate lines of force that overlap, creating Moiré interference patterns. “Achorripsis Triptych” combines what appear to be woven symmetrical patterns with ghostly transparent abstract forms, also symmetrical. It’s an homage to composer Iannis Xenakis’ 1957 stochastic/game-theory composition Achorripsis (‘jets of sound’), or in Xenakis’ description, “clouds of sound.”

The wealth of reference and subtext in Plank’s work is formidable, perhaps too much so, but researching them can be rewarding if you, unlike Alexander, have the time. If you don’t, you may still contemplate these intact Gordian knots avec plaisir.