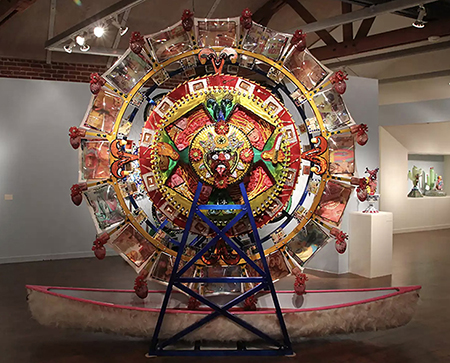 Visitors to the recently opened Cheech Marin Center at the Riverside Art Museum are often astonished by the extensive collection of colorful, narrative art there by Carlos Almaraz, Judithe Hernández, Gilbert “Magú" Luján, Frank Romero, Patssi Valdez and other pioneering Chicano artists: work that has been gifted by Cheech Marin, actor of the Cheech and Chong movies, and avid collector of Chicano art.

Another compelling attraction is “Collidoscope,” an exhibition of work by the bi-cultural (Einar and Jamex) De La Torre Brothers, organized with the Smithsonian’s National Museum of the American Latino. Comprised of 70-plus mixed-media works and installations, made primarily from blown-glass, these expertly wrought, boldly conceived figurative pieces often reflect their political and social perspectives. They also display influences from religious iconography, German expressionism, and pre-Columbian art. Yet the visceral aspects of the work by the brothers — who live and work in both Baja, California and San Diego — are surreal, combined with in-your-face contemporary inspiration and artistry. Several pieces in the exhibition employ lenticular printing, or complementary imagery that changes as viewers move alongside the works.

Heralding the De La Torre exhibition and rising like a shimmering blue mirage in the museum’s central atrium is the lenticular mixed-media creation, “Coatlicue” (2022). The two-story LED backlit mural depicts Coatlicue, the Aztec earth goddess and mother of gods and mortals, rising from the earth, with an overall design comprised of flora and fauna. As viewers move in front of her, the goddess image changes to a transformer robot designed with lowrider cars. Jamex explains, “We see her beckoning us back to a simpler life, using less resources and eventually living in harmony with nature. We see technology as the only way out of the global warming debacle. So, this transformer is the empowering image of future scientists coming up with creative ways to deal with the rising global temperatures.”

“Feminencia” (2020), also a lenticular print made with resin castings, contains two views, alluding to the strength and power of women, especially when confronting predatory males. View one features a male figure, possibly a preacher given that he wears a cross, cowering while surrounded by a plethora of gorgeous nude females, one embracing him. View two depicts a goddess-like image, probably of indigenous heritage, staring boldly at the world, surrounded by intricate baroque imagery.

The grandly illustrative "La Belle Epoch" (2002), a kinetic mixed-media, blown-glass installation, dominates a rear gallery. Evoking a Ferris wheel in design and intention, its central timepiece contains Aztec iconography, while 16 sculptural hearts are affixed to the periphery of the colorful carnival-inspired piece.

“Critical Mass” (2002) is a 192-inch-wide mixed-media allegorical wall installation that alludes to the brothers’ Catholic upbringing. The detailed narrative illustrates the devil releasing Jesus from the cross with an Aztec sacrifice, a cathedral being bombed, natives dancing, among other scenarios. Overlooking the scene is a large decorative sun with its tongue stuck out and a pompous monkey.

The mixed-media blown-glass “¡2020!” (2020), depicts a baby emperor on a throne-like bed, ringing in the 2020 New Year. Festooned with a bright red mask and a majestic crown, perhaps made of thorns and snakes, the baby holds a TV remote, indicating that they hope to be in control of our lives. Slim chance of that, then or now.

The De La Torre brothers have been collaborating since the 1990s, their sibling relationship and shared experience serving as a powerful influence leading to their complex, multilayered work. Jamex describes their process as "a continuous dialogue that goes back and forth." Einar adds, "We have so much in common in subject matter in aesthetics and use of material that it was natural in a way. We could see how the works would just got more layered and complex."

A discussion with the brothers reveals the genesis of their unusual collaboration, the development of their artistry, and their evolution as artists. Einar explains, “When we were kids. we used modeling clay to make toys that our family couldn't afford. As kids in Guadalajara, our parents took us traveling throughout Mexico — to Michoacán and Oaxaca — where we saw a vast variety of craft. It inspired our love for the vernacular craft available in Mexico.”

Jamex adds, “We have always had a deep love for the hands-on process, starting with the modeling clay we used when we were young. When we started college, implementing all the craft processes through a range of mediums was totally natural to us. But when we were in art school at Cal State Long Beach, Einar’s art professors told him: ‘You're a painter. What are you doing? You're wasting your time.’ I heard the same from my art professors about my sculpture. Today, we're more about mixed media, and we strongly believe that art schools grievously lack instruction in mixed media. The most interesting stuff coming out of major international art biennials now is mixed media or multimedia artwork.”

About collaboration, Einar explains, "Blowing glass requires help. And when you have helpers around you, they might pipe in and say, 'Why don't you do this or that?' We started listening to other people. And of course, we were always there for each other. So when we go into our studio to do mixed-media work, collaboration becomes a natural process.”

“We have a three-prong process,” he adds. “We do studio art, pedestal, wall and freestanding pieces. We do museum installations, creating an environment that we make with wallpaper, and you are inside of the artwork as opposed to seeing it on display. And we do public art, a different realm of engagement, putting our art in front of people in unexpected places.”

Regarding the surrealistic influences in their work, Einar says, “We relate to the way that surrealism speaks to the complexities of everyday life, and we relate to the bizarre juxtaposition of images that we see, which sometimes doesn't make sense to us. Just crossing the border is surreal business in our changing world, [especially] when it comes to the differences in cultures.”