Steve Roden
at Pasadena and Claremont
Review by Peter Frank 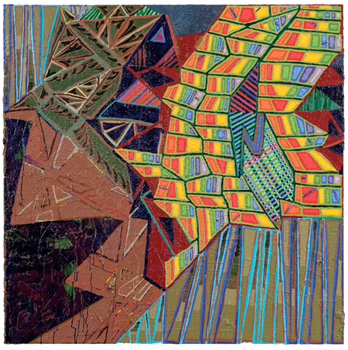 'we the darkness with a fire between us,' 2009, Steve Roden, acrylic and oil on linen, 66 x 66'' Collection of ResMed, San Diego. Photo: courtesy Armory Center for the Arts

PASADENA, CA
Steve Roden: "In Between" at the Armory Center for the Arts

Steve Roden is one of the most intricate artists in Southern California, and perhaps all of America. One might say "intricate artistic thinkers," given the wealth of information he engages in producing his art and the variety of forms his art takes. But the intricacy resides not in Roden's mind so much as in the art itself, and among that art's signal strengths are the surprising lucidity of its contents and the reassuring clarity with which they are seen to drive the resulting images, objects, and sounds. Roden is concerned with producing things that are at once engaging as the results of processes and gratifying simply as things. They provide a certain level of spectacle, even beauty, engaging the senses with a (sometimes literal) low hum of attractiveness while engaging the mind with a similarly modest but irresistible churn of formulation, a persistent, even dogged game-playing that unfolds before one. It's all as gently surprising and engaging as a (really good) crossword puzzle--you know, one of those puzzles that is full of clever but recognizable clues, its esoteric diversions seemingly tailored to what you know.

Roden is active as much as a musician--or, if you would, "sound artist"--as he is a painter and sculptor. He seeks to conflate the visual and the sonic into a kind of intermedium without having to abandon the intrinsic qualities of either art form. Oscillating thus between the eye and the ear, Roden in fact finds that "intermediate moment" elusive; rarely does he fabricate a piece in which sound seems truly to occupy space rather than enhance something physical that would exist (however merely) without it. In fact, Roden is at his most intermedial, rather than multi-medial, when he produces purely visual phenomena--usually paintings or drawings--that embody, or more accurately re-embody, musical thinking. He visualizes sound--more accurately, music--notationally, recapitulating its temporal and harmonic relationships as optical, and often verbal, structures. In a sense, Roden performs when he draws and paints and sculpts, "translating" between media rather than specific artworks, seeking neither simply to perform a score nor to render a score from an image (as, for example, a map or chart), but to set in motion a process of rendition--more accurate than an interpretation, less so than a reading--that results in something else. That something else embodies its source in having been grown from it almost organically, but does not re-picture or otherwise re-present the source.

Indeed, Roden's visual style, spindly but sturdy, reliant on linear networks and eccentrically fractured patterns, bespeaks a mind going for a ride, in full control of the steering wheel but not sure where it is headed until it gets there. The work powerfully transmits this sense of continually unfolding discovery, offering such a wealth of detail, whether painted, drawn, written, or assembled, that it pulls you in, making your study of the work a matter of time as well as space, even getting your eye to hear things. A Roden painting is a whole, but a fitful one, luring the eye with the sum of its parts.

No question, though, but that Roden's work both benefits from and mirrors his experience, mechanical and creative, as a musician. It does not, apparently, manifest any sort of synesthetic response on his part; he is not displaying, much less pretending to, any sort of visceral cross-sensory experience. Nor is Roden "marrying" music and art ekphrastically, re-stating the message or experience of a work in one medium in the form of the other. Rather, this "polyartist" (to use Richard Kostelanetz's term for artists who convincingly practice several discrete art forms at once) is motivated to investigate the circumstances of two media, two disciplines at the same time, sometimes combining them, sometimes intersecting them, sometimes driving one with the "rules," or at least effects, of the other (the paintings almost falling into "movements," the electronically generated sounds subtly filling spaces with oddly tactile presences).

"In Between," the ample but compact mid-career retrospective given Roden in Pasadena, emphasized the artist's work in two and three dimensions; his sonic engagement was evident in several sculptures and installations and one filmic display, as well as a single evening of performance and a CD of four sound/music pieces included in the catalogue. Still, the artworks were clearly selected to bespeak the musicality of Roden's thinking. "Performativity" abounded: the viewer could almost "play" this drawing, Roden himself probably "played" that painting from some sort of exterior information, the sculpture over there looked at once like an instrument and like a piece of music itself. The paintings, in particular, with their elaborate compositional networks, their rich textures, and their subdued, glowering colors, revealed the sensuousness as well as the intellect at the heart of Roden's career-long project.

By contrast, "when words become forms" in Pomona posited a rather expansive and delightfully old-fashioned multi-media installationÑa roomful of large wooden beams balanced on one another, the aggregate bombarded with a colorful, blobby light show and a cascade of electronic sounds--against a sequence of postcard-size abstractions accompanied with prose-poems by Michael Ned Holte. The sequence, packages/passages, had a third, unwitting collaborator, in the late Frederick Hammersley, whose antique postcards sent to museum staffers as they worked on his retrospective several years ago served as Roden's and Holte's inspiration. The installation, bowrain, felt like a collaboration--the sounds were unusually loud for Roden, who delights in the nearly sub-audible--but wasn't. Or, rather, it was Roden collaborating with himself. Again.