John White
at the Armory Center for the Arts, Pasadena, California
Review by Suvan Geer 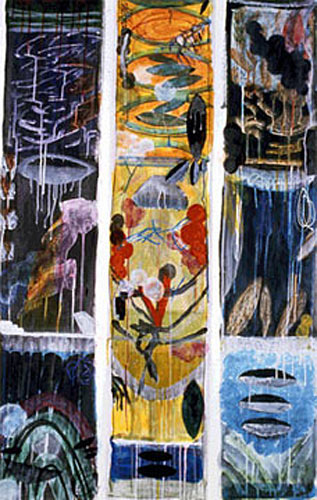 Since the late 1960’s John White has been making clever performances about his life as well as turning the plans and residue from those actions into art objects. White is notorious for his performance whimsy and the very visual way his actions map out the most ephemeral  of random thought processes. He can turn a game of golf into a metaphor for life and the perils of art strategy, or blow up a small item in the daily paper into an elaborate associative chalkboard riff.  The scope and diversity of the way he often strings disparate things together and renders them visual makes “Lifelines,” the neatly orchestrated retrospective of White’s work cogently curated by Betty Ann Brown, a welcome and useful perusal of the artist’s oeuvre.

It starts with a timeline that is as much a pictorial biography of a career spanning more than 40 years as it is a valuable historical document of Southern California performance art. White’s emergence coincided with the then new genre of conceptual work intent on using the body to dissolve the aesthetic divide between art and life. He was among those who embraced the theatrical potential of engaging an audience directly as a way to create a new, but shared art experience that was as ephemeral as reality, and equally as rife with multiple layers of meaning, associations and humor. The work was usually autobiographical, a ploy that provided a self referencing cycle of stories recalled, told, annotated and choreographed. That meant that the shared, lived experience also relied on and generated new essentially abstract material that also would be visually represented, recorded, and remembered as art. Quite a cycle, rich with nuanced notions about the role of experience in our highly mediated lives. And White made it fun.

After his official retirement from performance in 1989 White turned almost exclusively to painting as the way to record and share personal events. While still on occasion producing a performance (an installation for a new one scheduled for May 7th is included in the exhibition), it must be said that the switch from an art form that incorporated spoken and written language as well as real objects into a painterly world of color and form gives us a bit of a representational lurch. Also missing are the layers of self deprecating wit and inventive perspectives the artist brought to his ruminations about making art or the ways life plays out. But White certainly has a sensitive way with the brush. He can generate real aesthetic feeling from the dryness, or wetness of paint on a surface. His sense of pathos and nostalgia is convincing in the elegant “Kern Spin” paintings, which map time and vague circumstance around a dust devil. The liquidly mobile  “Deep Sea Scapes” and “Mailibou Lake” paintings so clearly evoke the emotional connection the artist has to the rivers and lakes he has fished in all his life that when he is quoted in one wall inscription saying that “The river runs through me” we know what he means – thanks to White we feel it too.