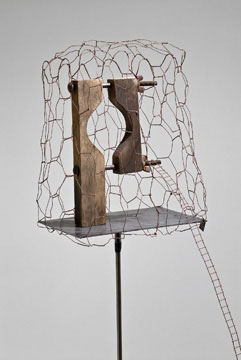 Though the sculptures of Maddy LeMel are simply constructed and of common materials, there are many possible interpretations one can take from them. A sense of nostalgia and the passage of time is inherent in the objet trouve, or found object, that comprises the material of assemblage. The objects are frequently distressed with age and use, having been cast off and banished, as it were, from their utilitarian state. But the trick of suggesting a narrative or metaphor with a few simple, aged objects that are conjoined is LeMel’s special magic.

It is a conjunctive magic that LeMel has mastered by placing distressed tools and devices in isolation, suspended within aged birdcages as freestanding objects of art. They are spindly, fragile looking objects, seemingly poised on the brink of physical collapse and extinction. Rusty, barely hinged together, leaning precariously towards disassembly, the sculptures quietly appeal to the viewer with a wordless empathy.

“Conventional,” for example, features a rusty wrench leaning topside down inside a chicken wire birdhouse. A perch made of thin sticks, utterly useless to the wrench, is positioned beside the odd tool, which looks for all intents imprisoned inside the cage. As with all of the sculptures in the exhibit, a ladder made of thin, twisting wire is fastened to the cage, suggesting escape. But this ladder, like the perch, would be of no use to the inanimate wrench. The ladder seems in fact to mock and oddly enliven the hapless tool with a faint suggestion of a getaway that is impossible.

The sculpture titled “Refuse” depicts a birdcage made of rusty wire, but the roof of this cage opens up and the wiry ladder winds down into the interior. Standing straight in the vertical cage is a ball peen hammer, yellowed with age and poised for freedom. But the means to achieve release are nowhere to be found.

The ladders of twisting wire that run through this body of work provide a note that can lead the mind into a number of interpretive options. They provide both an intellectual and emotional pathway into the art that evokes empathy with the entrapped anthropomorphized objects. They also offer relief for the mind frustrated by the impossible conditions presented. This frustration is given a clear enunciation in the work titled “Suppress,” in which a green garlic press remains, apparently by choice, in a round cage from which it would actually be simple matter to escape.

“Revolt” and “Longing” are suspended from the ceiling by wires, literally living up (or down) to the exhibit title in their manner of presentation. “Revolt” suggests an action of pulling down, as a means of achieving freedom. “Longing” like “Suppress” strikes a humorous tone, in that liberation from the cage’s constraint would be a simple matter for the object if it chose to escape.

Though LeMel’s sculptures address fundamental human concerns, like the fear of entrapment or the dilemma of aging, there is an additional more topical political dimension. A possible social commentary presents itself. These tools, like many individuals confined within our penal institutions, might still have a useful life if some realistic rehabilitation can be forged, and not just one made metaphorically from the spindly and ineffective wires from which are composed these ladders of escape.