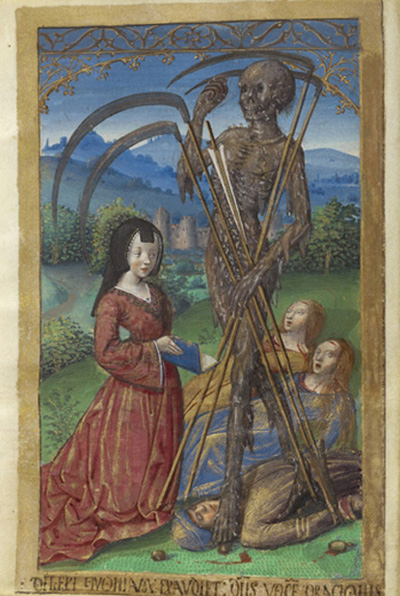 As generalizations go, an egregious one is that so called non-Western cultures are more apt to consider metaphysical conundrums like death and what it means. The classical Enlightenment tradition, with its foundation in Greco-Roman logic, is supposedly less engaged in this concern.

Why societies are more or less willing to confront what happens after ‘this’ is so vastly complex as to render that truism not just culturally loaded, but plain stupid. To be in constant contemplation of our demise is evolutionarily, psychologically and socially unsustainable – we would not work, mate, or toil for capital and property if we acknowledged that at any moment we might be gone. The Neanderthal placed flowers in graves, so even they must have been asking what is next. Plato’s Allegory of the Cave is a rationalized contemplation of what lies beyond quotidian sensed reality. The Roman cult of ancestor worship had as its function (in addition to maintaining patrician lines) a linkage between those  of us ‘here’ with those ‘over there.’ Human beings wrangle with their end. Period.

A more interesting way, then, to frame this fascinating subject is why do these preoccupations become more or less overt at this time or that in history? Why do we seem inclined to engage the scary prospect of life/after life at some times more than others? This very topic is taken up in "Heaven and Hell and Dying Well: Images of Death in the Middle Ages," a truly stunning exhibition of mostly medieval manuscripts corroborating what we know but struggle to understand. Medieval Europe was particularly sensitized to visions of death (not to mention exposed to its daily reality), as well as death's handmaidens, paradise and damnation. The reason for this preoccupation might have been that once nomadic, now Christianized tribes had to be taught what was at stake if one did not heed the call. Growing urban centers presented all manner of rebellious temptations and a largely illiterate public needed to be visually discouraged from same.

Whatever the impetus, prepare for a treat. Imagine if you will those huge carved church tympanums – like St. Lazare at Autun or  Notre Dame in Paris – showing judgment’s demons yanking sinners down to Hades grabbed by their breasts, heels, heads. Only here such images are concentrated and intimate, intensely colored and finely lined in the magnificent detail of book illustrations. As fine art, the scenes are less horrific and certainly more aesthetically appreciated by our modern eye than they must have been to frightened believers in their day.

Though billed as a show of ‘medieval’ works (for what are clearly stylistic reasons), the most memorable images come from the era of the Renaissance. In one gorgeous work, "Denise Poncher Before Death" (ca. 1500), the figure of Death — a skeleton with a rotting body — looms over a fair damsel as if to say “dust to dust, so behave yourself my pretty.”  Simon Marmion's "The Beast Acheron" (1475) is a little image that looks as if it could have been borrowed from Fuseli's sketchbook or from 20th century Surrealism shows the enflamed, jagged-toothed mouth of Hell (here, specifically the medieval demon Acheron) consuming struggling souls.

World class examples from the Getty’s renown illumination holdings (as well as from other impressive lenders) provide a rare opportunity to view speculations on mortality that inspired both hardboiled Church doctrine and secular poets like Dante.