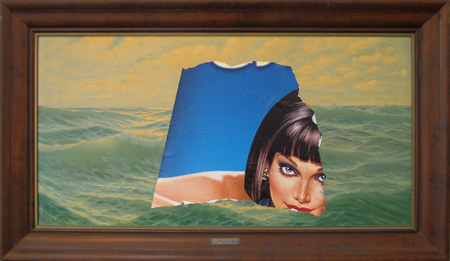 As though she is seeking to enter into the memoires of the previous generation, Alexis Smith has made a long and successful career of wandering nostalgically through a past that through art becomes wholly hers. Always a practitioner of intertextuality, Smith has interjected occasional shots of political commentary into a body of work deeply engaged in a historical collective consciousness of popular culture. Her deceptively casual and off-hand references to film and literature hide a probing examination of a lost time. Smith uses collage, not so much as a formal device but more as a conceptual gesture of layering of pluralities.

"The Last Time I Saw Paris" refers to a tragic 1931 short story, “Babylon Revisited” by F. Scott Fitzgerald, a tale of love, death and self-destruction that was translated into a tearjerker 1954 movie. But the framed collage contains no overt reference to Fitzgerald nor to the stars of the film, Van Johnson and Elizabeth Taylor. Instead, the Proustian narrative of regret is overlaid with a Madeline hat smack in the center of the collage, an understandable gesture only to those who have read the Fitzgerald story: Charlie, who drunkenly locked his wife, Helen, out in the snow, thus causing her death, returns to Paris, all dried out, to reclaim his nine year old daughter, Honoria. The girl’s straw hat, suggesting Ludwig Bemelmans, evokes the child left behind but remembered through the startling taste of the madeleine of Proust who wrote, “Will it ultimately reach the clear surface of my consciousness, this memory, this old, dead moment which the magnetism of an identical moment has traveled so far to importune, to disturb, to raise up out of the very depths of my being?”

The background of Smith’s accumulation of bitter memories is a thrift shop faux Impressionist tourist painting of post-war Paris, the kind of painting that makes the city look both chic and spoiled, like a child, the Paris of "Charlie:" "I spoiled this city for myself. I didn't realize it, but the days came along one after another, and then two years were gone, and everything was gone, and I was gone."

Although Smith’s collages may seem witty, none of the small but potent servings are an amuse-bouche, but rather a trenchant commentary that lurks just beneath the surface. "Rule of Thumb" seems to proffer a wooden ruler, which states “Smokey’s Friends Don’t Play with Matches.” But the rule referenced here - a carpenter's measured wood - also came to mean (incorrectly) the size of the stick a man could use to beat his wife. The vista spread out behind the ruler is yet another tacky painting of mountains, forests and meadows populated with deer. The American environment, once pristine and densely forested, which the logging industry long since clear cut, is threatened as culture dominates nature, ruled by a magisterial society still measuring itself by Manifest Destiny. Other works in the exhibition, such as "Open Arms," "Second Hand Rose" and "Adrift," are perhaps less complex. "Adrift," comprised of a bad painting of a green sea swimming in orange sunset pasted over with the torn fragment of a woman’s face from an illustration ripped from the fifties, may be a judgment upon a lost and directionless society in this new century. With Alexis Smith, a picture really is worth a thousand words.