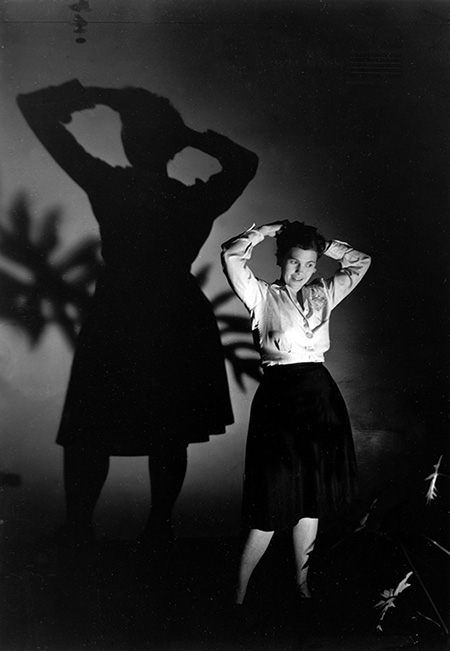 Ray Eames was closely associated with her husband, the brilliant modernist designer Charles Eames, but her genius also flourished in a unique, and relative to the times, equal artistic partnership that allowed her to delve into architecture, furniture design, exhibition design, film, photography, painting, sculpture, textiles and design for products and branding. This survey of her art and life gives us a chance to revisit unique artistic ideas that have been overlooked.

As a small child she was fascinated with fashion and for fifteen years created unique wardrobes and multiple changes of outfits for her paper dolls, all rendered beautifully in a highly sophisticated manner, such as her cream dress edged in black with a delicate floral pattern from the 1930s. Her early interest in fashion (she received a two year degree in fashion design from Bennett College) would manifest itself in many different ways during the years, giving her designs a richness and flair that enhanced their simplicity.

Until now Ray Eames has been thought of as a designer more than as an artist. This exhibition demonstrates that she was an artist first, then became famous with her husband in design. Her dynamic and fluid paintings and sculptures speak volumes about the fertile period of abstraction that offered her total immersion in imagery derived from natural forms. She studied in New York from 1933-1939 with the abstract expressionist painter and renowned teacher Hans Hofmann. In addition, she was a founding member of the American Abstract Artists group, which gave her a way of combining her interest in organic, abstract forms prevalent in the New York school with the curves and elegance of her later designs. Her small drawing for a mural collaboration with Ben Baldwin from the early 1940s shows off her insightful recreation of surrealist imagery. Interlocking curves and negative space fit together like a puzzle in black, white and burnt orange. Her drawings have an intimacy and energy that pulls the viewer into her aesthetic vortex. An abstract ink on vellum composition is a case in point, its curved form like an amoeba surrounded by a blob of black ink, with curvilinear lines intersected by spiky forms that suggests life emerging. Her splendid design for two carved wooden splint sculptures reads like a Rorschach ink blot as negative space assumes equal importance with the black curves and punched out holes of the form. The rhythm and shapes are unified and cohesive, with a self-perpetuating dynamic that is so essential to her work.

A color drawing of a mobile for John Entenza, the publisher of Art and Architecture magazine, says it all. The acidic colors are characteristic of the time, with brilliant pea green clashing with a glowing magenta; the amorphous organic shape winds in and out of space, punctuated by black curvilinear shapes. The entire form has an internal combustion that sizzles off the page. Her logo for Evans Products, a test on canvas from the early 1940s, is inspiring in its quintessential simplicity. Only a black curved splotch with two arms propels itself through space with great intensity and energy. It has the continuous fluidity inherent to all her designs.

Along with her husband, she was closely allied with the architectural innovations of the mid century modern style. Their Eames house, which served as "Case Study House #8" (1949), was part of the two-dozen homes designed for the now famous "Cast Study House" program led by Entenza.  Eames House was a distillation of their ideas about design and art, life and nature. The exterior of this home looks like a Mondrian painting, with glass panels and blocks of color that articulate the façade and let in nature at the same time. Its simple appearance belies its complex design, a hallmark of the mid-century modernist ideas in architecture. It remains an iconic structure, both inside and out.

The marvelous photograph of Ray by Charles Eames is a perfect reflection of both their creative partnership and their pared down but rich aesthetic. By using only the shadows of her figure and of a branch of leaves as a backdrop, he created an image that is multi-layered and mysterious, yet elegant in the extreme. Like his wife and partner.