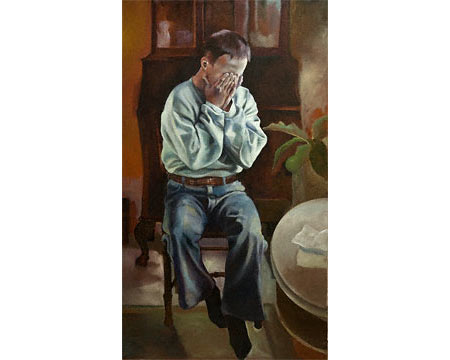 Kathryn Jacobi’s finely wrought images sum up the passion of “Body and Soul,” an exhibition of three strong figurative painters that also includes Margaret Lazzari and Galya Pillin Tarmu. All the artists are classically trained in the figure but bring their own unique style and vision to the equation. It is fascinating to see how they approach the emotive and physical traits of their portraits and figurative narratives. Strong modeling, the rich use of color and a vibrant psychological core are on display in all of the work, for a small university gallery it is an inspiring choice of artists and a coup to exhibit these three together.

Jacobi's figures are beautifully modeled and reflect her own surreal view of eerie reflection and isolation, while her figures appear to be monumental and fill up the frame in both intensity and image.  Her portraits convey the impression of immense personality and spirit. Set in a drab, monochromatic room, Jacobi’s male protagonist in the painting “Powell River Tim” offers up a volumetric loaf of bread that is a still life in itself, in such a completely symmetrical composition that he becomes an icon radiating good will. The delicate coloration of his clothes and the background is a rich study in grey and tan. His face and the folds of his sweatshirt glow with light. The peace that is so implicit in the first portrait is shattered in the second. The same young man holds his hands over his eyes in grief. It is the same setting as the first portrait, and just as delicately rendered in shifting bands of bronze; the young man is frozen in a profile of despair. Jacobi’s skillful use of light and shadow adds to the drama. Her stylized figures contain a potent emotional catalyst that never ends; even her portraits of babies have a haunted look that is uncanny and unsettling to the viewer.

Lazzari's voluptuous <>nudes seem a long way from her more ethereal figures that appear to float in a dreamlike state, but still have have an underlying monumentality that characterizes much of her figurative work. “Above and Below” demonstrates the trance-like atmosphere; two girls float in a seemingly infinite space, perhaps as part of a dream. Their hair and arms drift along as part of the rhythmic movement and dance of the painting. They function as harbingers of a world in limbo. Her use of color is luminous and fits the ethereal scene; touches of blue are accented by a deep pink of the bathing suit and a shimmering pearl white. Lazzari’s sketchy but robust female figure looks up at a whirlwind of flowers and leaves that is either going to subsume her or surround her in the mixed media painting “Maelstrom.” The color is delicate and joyous, with magenta and green flowing together against a deep gold ground.

Tarmu's  work is expressionistic in a way that enhances the physiological underpinnings of the other artists' work. Her groupings express a tense interaction between figures, who appear like actors caught in an unknown play. Two figures emerge from a scumbled mass of lines, one drinking coffee in the lower left of “Gossip.” Existing almost as caricatures, the faces on the figures are smudged and dark, yet their sharp features are clearly discernible and have much force of personality. The painting is composed of a series of rectangular spaces knit together to create this compelling tableau vivant. Hues range from a deep black to a shimmering gold. Tarmu enhances the mystery of the scene by conveying isolation among figures in spit of placing them together. “Quartet” features four older women listening and talking among one another. Their faces display wisdom and weariness as their features are rendered in planes and shadows. One gaunt woman wears a Mickey Mouse t-shirt, which only makes her look aged and frail instead of youthful and carefree; Tarmu has an incisive way of capturing the women as they engage in their endless discussion. Her vivid colors also emphasize the angular modeling of her sitters, as the women are silhouetted against a glowing tangerine orange background that resonates against their clothes.

These three artists reveal the figure in all its dimensions, ranging from fraught emotional undertones of the elderly to the joyous abandon of youth. They create their own vivid reality where their figures interact and the spectator catches a glimpse of their inner lives. Through adept modeling, luminous colors and inherent sensitivity, each artist injects their respective figures with a stylized point of view, whether it be surrealism, expressionism or classicism. It adds up to an enticing exhibition.