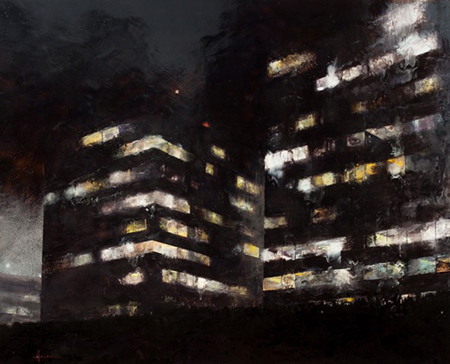 Eric Hesse shows a suite of new encaustic paintings in his aptly titled exhibit, "Somebody Else’s Light," that encapsulates the filtered light of Los Angeles. He uses the ancient encaustic medium to catch the luminous reflections and depth of the urban environment depicted in these cityscapes. Its a fresh take on contemporary realism that makes compositional use of unique angles and the delicate layers of light and color that the beeswax affords.

Hesse finds beauty in the everyday sights of a monumental but stark freeway ramp composed of variegated greys, blues and tans that becomes an understated and subtle abstract study. Or in a towering office building that sparkles with glowing colors of bright lights from every window that dramatically contrast against the black night. A glance down into the city from an open window framed by jade green paint becomes a study in color, as the jewel-like lights of the city touch the horizon of a saturated midnight blue sky. The encaustic medium softens the edges of his geometric studies, especially in his representation of freeway ramps, so they become a poetic eulogy to our engrained use of the car. As no traffic appears, the ramps function as massive relics of a lost civilization.

In his exhibit, titled “Alphabet," Tim Vermeulen also looks to the past to create incisive and witty paintings based on the alphabet depicted in "The New England Primer" from 1727. Each letter was accompanied by a poem with the Puritan themes of sin, guilt, death and decadence to help the children remember the letter. By recreating and echoing these Puritan proverbs Vermeulen adeptly focuses on the problems of contemporary life.  He looks to the dense and intricate oil panel paintings of Netherlandish artists such as Robert Campin and Jan Van Eyck, as they are filled with religious symbolism and visual oddities that parallel his own riff on Puritan themes.

Each painting is highly detailed and framed in gold, recalling Jon Swihart’s update on realism, but they have a strange contemporary ambiance, as in "Nightingales Sing, in Time of Spring," where a bald young man in cargo shorts looks out the window in a room full of caged birds. He upends a Puritan maxim for W in "W. Whales in the Sea God’s Voice Obey,” in which a prisoner stuck in a cell posts drawings of whales all over the walls. The vivid colors of the turquoise walls and the orange of the prisoner’s garb makes for a visually striking painting that turns grim when the bare necessities of the cell become apparent. A student in a dunce cap embodies the Puritan work ethic in the proverb for F, "F. The Idle Fool, Is Whipped at School."  In this precisely rendered tableau, the depth of public humiliation is clear as the young man bows his head across from the desk where the teacher’s red apple creates a visual and ideological counterpoint.

Both artists use representation in contemporary ways. The monumentality of the urban architecture and the diffused light of Los Angeles beautifully coalesces in Hesse’s shimmering encaustic panels, while the theme of Puritanism that still runs through American society is skewered in Vermeulen’s precise and colorful vignettes.