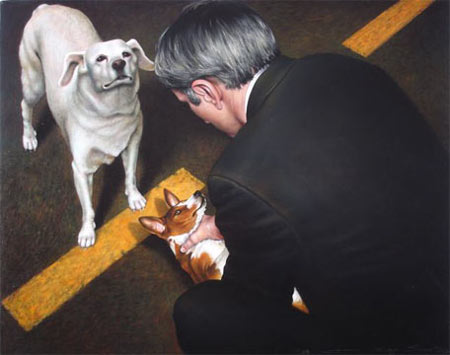 Jorge Santos’ surreal, intriguing visions reach beyond the bounds of immediate reality, the result perhaps of a childhood spent in countries experiencing political turmoil. Born in Angola on the coast of Africa, his family was forced to flee to Lisbon, Portugal when he was 16. Although Santos’ paintings owe a debt to the psychological implications of early Surrealism, his geographical and multicultural background may be the primary inspiration.

Idiosyncratic and ambiguous, his works touch enough on the edges of reality to elicit a sense of unease. Forlorn, haunted figures populate melodramatic tableaux, arranged for implied metaphors that elicit discomfort. In “Bookworm” for instance, a lone woman wanders an isolated landscape, oblivious to the threatening sky above. It is a discomforting vision, but not all of Santos’ juxtapositions are so subtle. Interpretation is implicit in “Empty” for example, where a partially dressed woman stares vacantly as she lies beside an empty gas container. In “Jockey,” which depicts an emaciated jockey reacting in fright to the majesty of his healthy horse, the gist is equally apparent. The normal human spirit has vacated these people.

Though these paintings can imply obvious narratives and connotations, they are nonetheless disconcerting. Ambiguity and the dis-ease that can accompany it prevail, however, as in “Dog Wrestling,” where a man is ostensibly doing battle with a dog, an eccentric enough act to begin with. Here it appears as though the dog is being actively choked. Unconscious aggression is implied, but in a true Surrealist sense, Santos uses metaphor as the socially approved channel for expressing it.

Where Santos expresses interior, out of the ordinary worlds, Adam Normadin’s Photo-realist paintings focus on the external and the ordinary. It is, in fact, a sense of wonder at the mundane that has lead him to reveal the beauty of what is in plain sight but often missed. Normandin has mastered the complex relationship between photography and painting sufficiently well to allow the one media to feed into the other. After using the camera to capture the subjects he is drawn to, the images are then transformed into paintings. Though he is exacting in his attention to original details, he does a certain amount of alteration for aesthetic considerations. Cleaving to the Pop tradition, he imbues the commonplace and the functional with a vital spirit.

Recent paintings of freight trains carry special significance, conjuring romantic visions of travel. When depicting trains within the context of mysterious environments, he leaves it up to the viewer to attach their own meanings. But it is the pentimento layers of weathering that he is most interested in peeling away, isolating elements easily missed when the train is moving. He  exposes, for example, subtle details such as rust over a beam, or the aesthetic arrangement of certain mechanical parts. In “Keeping Watch” for instance, he zeros in on a small section of train machinery, capturing the beauty of its Mondrian-like geometry.

Bearing foreign characters, the vibrantly colored containers in “Corridor” stir romantic visions of far away places. But it is through his images of freight train graffiti that he taps into a unique segment of American culture. It is an art form that evolved from New York subways, and Normandin reveals the variety, the beauty and the ingenious use of the trains as a backdrop. In “See,” the deep green patina of a train car allows bright orange lettering to achieve a distinctive beauty.

Since many of these trains have been in operation for decades, it all speaks to the mutability and mortality of functional machines. Normandin relates on a personal level when he states, “If something mundane and functional can communicate such complexity, perhaps we can find meaning within the most ordinary aspects of our own lives as well.”