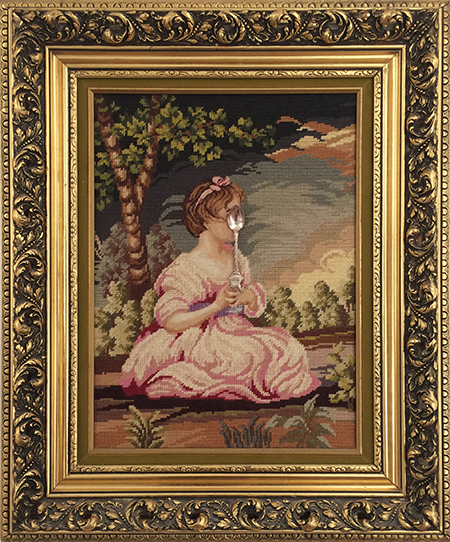 The poet Isidore–Lucien Ducasse (Comte de Lautremont) once described writing as “… the chance encounter of a sewing machine and an umbrella on a dissection table ...”. This definition is synonymous with and perfectly encapsulates both the Dadaists and Surrealists ideas/ideals. Around the same time (1915), Freud’s “Theory Of The Unconscious” liberated artists from the known and plunged them into an exploration of the unknown and unknowable. Stream-of-consciousness techniques became the rage in writing and in art. The Dadists and the Surrealists celebrated the random juxtapositions of text, printed matter and found objects, dripping with narrative possibilities as a way to create rebellious anti-art. Enter the conceptual granddaddy of them all, Marcel Duchamp. His industrial/consumer objects (ready-mades) plucked from shops to be presented as is or barely altered (signed with a fictitious name) launched the fertile ground that contemporary artists have been mining for decades. Duchamp’s ready-mades began the conversation about authorship that continues to the present day. What is art you ask? Is art what artists say it is? Is it art because it appears in an art gallery and, conversely if no one buys it, is it art? (Artists battle the IRS over this constantly).

Alexis Smith mines her collection of found thrift store paintings and needlepoint as the starting point for this new body of work. The work is much more reductive and taciturn than her earlier work. In “Silver Spoon” Smith presents a fairly accomplished needlepoint copy of an eighteenth-century Rococo portrait of a girl seated in a bucolic landscape framed by an ornate gilt wood frame. Smith has affixed the eponymous silver spoon on the girl’s hands, obscuring her face, but close to her mouth. A silver spoon is synonymous with inherited wealth — the expression “to be born with a silver spoon in ones’ mouth” apparently first appeared in print in the 1719 Peter Anthony Motteux’s translation of "Don Quixote." This ironic image is an infinity of mirrors begging the question of what separates high art from kitsch. Also who has inherited wealth? Most likely it refers to the collectors and patrons of art rather than the supposedly “starving” artists.

Smith’s use of these works — sometimes barely altered — seems more universal than specific. In “Swashbuckler” she juxtaposes a found amateur landscape painting (a fair facsimile of the 18th century Italian painter Canaletto’s landscapes) with a plastic toy sword attached across the picture plane in a slashing diagonal. This title reminds us of the ubiquitous heroic adventures such as the Three Musketeers, Errol Flynn and the satiric movie “The Princess Bride.” So where are our heroes, our swashbucklers now in the 21st century? Smith is known for her sly sense of humor and examination of women’s issues, some of which is on display here but sadly lacking her customary verve.

Greg Colson’s intriguing mixed media works all involve quirky schematics of man-made and naturally occurring systems; solar, metro, urban, government, relationship and emotional intelligence — to name a few. Like Smith’s work, text and found objects are essential elements in his collages and assemblages. The pieces range from the whimsical “Pub Crawl,” a map of sorts with foaming beer glasses at all bar locations, to the more somber “Senate Sponsorship.” The latter takes a common graphic of the U.S. Senate, with Republican seats normally shown in red and Democratic seats in blue, and turns it on its head. More than half of the dots (representing Senate seats) here are white or intentionally vacant. The rest are a mash up of red, yellow, gray, pink and various other colors. The top half of the composition is painted black, and the bottom half is left with the white of the cardboard itself essentially untouched (with white-out over the print) suggesting complete and utter opposites.

After the contentious recent election, it is easy to read much into this work, which is paradoxically both funny and sad. “Yacht Model of Integrity” is composed of simple forms to which Colson assigns important values to different parts of the boat: the mast is the spine, on which has the word ‘integrity’ is printed. The sails (which help you move in a particular direction) deal with self-management issues. The bottom of the boat is equated with the conscious and the unconscious. The rudder is, of course, your values. This is a bit too literal, and not as engaging as some of his more metaphorical works.

“New Apple Headquarters (Level2)” is a fun piece to deconstruct. It is literally an old, beat-up life preserver that is marked with the suggestion of code. Who is saving whom? The ring shape connecting the life preserver and the architecture of Apple headquarters gets us ruminating on Apple’s role in the economy and more. Each of the mixed–media works of both artists offer a unique narrative that reminds me of Winston Churchill’s famous description of Russia’s policy (also how appropriate) as “a riddle wrapped in a mystery inside an enigma.”  One can say the same about both Smith’s and Colson’s rich and diverse bodies of work.