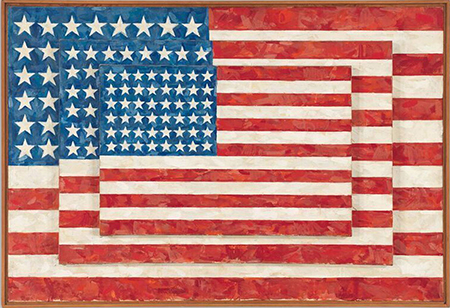 The Jasper Johns traveling exhibition that has landed at the Broad, “Something Resembling Truth,” is the first sizable show of the artist’s work at a SoCal venue in 50 years, is a mixed bag. It provides an opportunity to see a number of the artist’s now-canonical paintings of flags, targets and numbers gathered in one place, but it also discloses how the verve displayed in those early works was frittered away in the course of John’s ensuing retreat into self-absorbed hermeticism.

Johns’ one great idea was that after the gestural mark had been revealed to be conventional rather than existential, it became available as a means of denaturalizing signs whose wide circulation made them “seen but not looked at” in the artist’s words. This idea found varying expressions in the work of the various artists who became associated with Pop art. For several of them, and Johns in particular, that Pop label was misapplied. Popular culture was never Johns’ concern. The readily intelligible readymade engaged a populist impulse, and Johns perhaps went furthest in appreciating and aesthetically exploiting this.

Rather than batten on to the clichés of advertising, comic book illustration or consumer product design, he found his readymades in the most rudimentary and flattest of visual signifiers. As has often been remarked, flags, targets, maps, numbers and written words obliterate the distinction between representation and reproduction, and this draws attention to the difficulty of making the distinction as we entered the age of mass media. A picture of a map or a flag or a number is at the same time a map, a flag, a number. Why does this matter? Because it points to the way that Johns and other post-Duchampian, appropriationists were able to transfigure Duchamp’s seemingly nihilist gesture of “reducing” the creative act to mere nomination into a positive proposition about the overlooked creative possibilities of usage.

When he painstakingly painted the American flag in encaustic, Johns revealed how the familiar could function as a template for the abstract. In a way that the older generation of Abstract Expressionists could not properly appreciate, Johns (along with close colleague Robert Rauschenberg) gave the gestural mark a new lease on life by acknowledging its conventionality and then demonstrating that this acknowledgment was not a devaluation but an unburdening that opened up representation itself to abstract reinterpretation. In other words, Pop art in Johns’ hands was not the “return of representation” that it was widely understood to be at the time of its birth, but a prolongation of abstraction made possible by the recognition that the reconstruction of familiar signs (be they flags or soup can labels or comic book panels) relies on the aggregation of countless acts of abstract composition — all the more so when the image being reproduced is so familiar that how it is remade takes precedence over what it denotes.

Thus Johns’ early work, even today, retains the freshness of a pulse-quickening revelation. What a joy it must have been for Johns to find the perfect means (in a dream!) to make visible the knot that ties together abstraction, representation, reproduction, invention and authorial self-effacement.

The Broad exhibition would merit a visit on the basis of the inclusion of such early works as “Three Flags” (1958), “Flag” (1967), “Target” (1961) and a vitrine housing a number of his sculptures of lightbulbs, flashlights and beer cans. There are also works like “Fool’s House” and “Periscope (Hart Crane)” that confirm Johns’ talent for mobilizing seemingly banal signs to express private anguish.

Unfortunately, these seminal works are bundled up with a large quantity of his work from the ‘80s and beyond that suggest that success motivated Johns to strive for greater complexity in his work, but at the same time robbed him of the ability to discriminate between vapid self-indulgence and genuine pictorial inspiration. Robert Storr in his catalogue essay for the exhibition dutifully unpacks the many references in Johns’ later paintings to the works of other artists. It is a stellar list that includes Mathias Grünewald, Pablo Picasso, Edvard Munch and Marcel Duchamp among others. But what it unwittingly highlights is the meagerness of the results of Johns’ allusions.

Reviewing the version of the exhibition that was on display at the Royal Academy in London prior to traveling to Los Angeles, The Guardian’s Laura Cumming characterizes this later work as a “nosedive.” I do not agree that it is as awful as all that. Works such as “Untitled” (1988), “Montez Singing” (1989), “Green Angel” (1990) and “Regrets” (2013) reveal a compositional sophistication that merits extended scrutiny. The problem is Johns’ frequent and seemingly oblivious debasement of his sources. The most egregious example of this is what Johns does with Munch’s “Self-Portrait: Between the Clock and the Bed” (1940-43) painted near the end of Munch’s fraught life. From contemplating this unflinching, poignant confrontation with mortality and isolation, Johns’ take (“Between the Clock and the Bed [1981]) zeroes in on, of all things, the pattern on the bedspread. In his series based on Munch’s painting and titled after it, he re-envisages the image as all-over patterns of crosshatch marks. This is, quite simply, a travesty.

At the conclusion of the exhibition is one of Johns’ most iconic works, “Painting With Balls” (1960). That painting, too, is a travesty, but it was a deliberate, provocative, well-aimed send-up of by then declining Abstract Expressionist machismo. It is a consequential travesty. Johns at that point in his career was involved in something like a lively conversation with his peers and antecedents. However, for some considerable time now, he seems to only be conversing with himself.