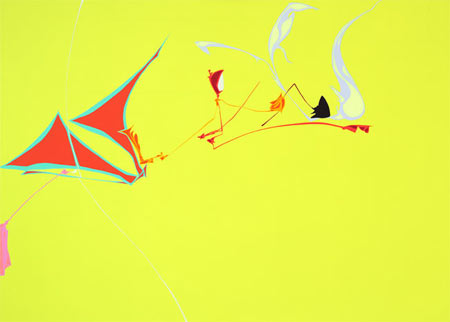 A surreptitious and quite childlike delight masquerades behind the fastidiousness of Heather Gwen Martin’s large oil paintings. Large areas of flat, bold color subvert the restrained austerities of minimal abstraction with a violent energy that is nothing if not anarchic. The wonder is how the artist pulls it off. It’s a suggestive high wire act, poised over a divide between color and form, that both undermines and asserts its own seriousness with exaggerations and elisions that prove to be as truly “lowbrow” as you might at first suspect them to be.

The abstract rotundities, intricately stretched lines and delicate floating shapes suggest nothing so much as cartoon violence. And, as it turns out, that is exactly what Martin wants us to infer. “My paintings are mini battles comprised of human, alien, and machine forces,” she writes in her artist’s statement. “Everyday situations become funny, bizarre encounters that manifest into plans to take over the world as toys, weapons, and space invaders go to work.” Not surprisingly, the big influences here are the Warner Bros. Looney Tunes of Chuck Jones and Tex Avery, along with Tom and Jerry animated cartoons. Martin acknowledges these, as well as trashy reality TV shows, as primary artistic influences.

“Sex, violence, and machine are themes I draw upon to create paintings that address odd interactions and strange relationships,” Martin notes. It was something of a relief when I came across this quote because Martin’s suggestive canvases really parlay abstraction into an inflated comic eros between flesh and machine. “In this play there are real ideas about toys and weapons, passion and violence, space aliens and people — which I find perversely funny,” she candidly admits.

You’ve got to stand beside one of these paintings to really soak in their perverse erudition. Take, for example, the 4 by 5 foot oil-on-linen painting titled “Swift Invader.” There are several varieties of the color pink which fill its surface with a plenitude of swelling, biomorphic shapes that are sensuously, indulgently organic. The array of these subtle magenta colors is fleshy and erotic. And the conflicting complementary-colored azure and lime green shapes chromatically splayed on that seemingly vast sea of pink suggest nothing so much as hapless opposition. Call me atavistic but I definitely connect with this painting in a way that, shall we say, bypasses the neo-cortex and speaks directly to my mammalian nature.

With a few ridiculously tenuous lines of primary color spooling out as a diminishing arc against a large flat space of blinding yellow, “Bound” reminds one of nothing so much as Wily C. Coyote hurling out over the edge of a desert mesa into the empty void of air above trackless desert, hovering motionlessly in the final millisecond before his whistling fall into the distance far, far below. For those who might need an explanation of the reference, I am referring to the hapless antagonist of the Warner Bros. “Roadrunner” cartoons. The character was perpetually frustrated in his attempts to capture the speedy and insouciantly monosyllabic title character of the Roadrunner. It is also be possible to discuss this painting in formal terms by pointing out its bravura use of asymmetrical negative space.

Take a wildly gifted inner child and filter their exuberant playfulness through all of 20th century modernism and you might possibly end up with something like the painting titled “Blind Spot.” What, you may ask, is that little black kite doing hovering above those massive crimson rotundities? I get the feeling that its presence there is somehow furtive or transgressive. But wait a minute. This is just a boldly colorful abstract painting. Or is it?

This is why I used the term “relief” to characterize my reaction to Martin’s explanation of her work. It confirmed the consistentcy of what I inferred from her work. In an interview with Kim MacConnel for the catalogue essay of this show, Martin explained a painting by stating “the chicken is being chased by [a cartoon farmer] with an ax, swinging wildly, spewing feathers, and sweat, and parts, as it tries to escape the blows …” Now, that’s some real artspeak. But, of course, the irony here is that these coolly elegant paintings are also magisterial in their empyrean use of abstraction.