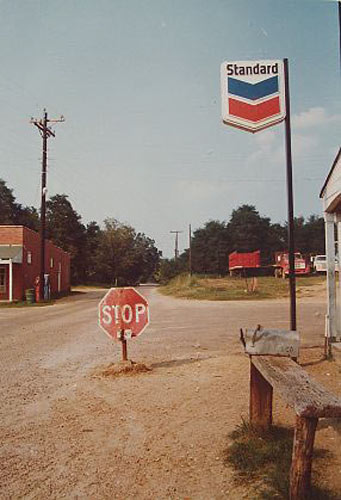 Somewhere on a nameless country road in the middle of nowhere, there was found an upside-down car. A relic from the 1940s, the vehicle had rusted in the Southern humidity to a uniform and oddly beautiful rust red, punctuated by brave points of shiny courageous chrome. If you don’t know the photographer, you know the 1972 photograph of a memory left behind like an abandoned turtle. The Los Angeles County Museum of Art, along with a pair of local galleries are presenting a collection of the work of William Eggleston, one of the great locators of found objects of his time. The exhibitions span his career, demonstrating his working and thought processes along with the evolution of a new genre of color photography. “Rusted Red — Upside Down Car” hides a story and evokes mystery, but the photographer is respectful of its privacy and leaves the automobile behind in a now forgotten corner of Memphis.

No question, this is the season of Eggleston, one of the most evocative photographers of vanishing worlds left behind by time and progress. The gallery shows serve as a companion piece to the larger museum show. After a fifty year career which witnessed a change in what it meant to be a photographer, the  works of Eggleston as seen here provide an overview of not where we are going, but what we have left behind. In the middle of the Civil Rights Movement, Eggleston staked out the South as his territory and adapted the hard eye of Robert Frank by softening his look to capture a landscape that was vanishing before the eyes of the nation. Moving away from the political eye of Danny Lyon, Eggleston shifted from sharp black and white to intense colors and roamed what he termed “the democratic forest.” Although we see some of his late black and white images of ordinary working folk, such as “Shoney’s Waitress” (1968), we should not assume that Eggleston is a man of the people.

For this photographer the “democratic forest” is not about the political process but the photographic process, that is, his desire to photograph everything equally. The equality refers to his early moves toward color, as he attempted to not know what kind of film his camera was holding. The selection of “Breakthrough Prints” shown at Edward Cella demonstrate Eggleston’s stance of neutrality towards not only what should be photographed but also how. These historic images became the famous “William Eggleston’s Guide” for the first show of color photographs at the Museum of Modern Art, as well as the Museum’s first book of this kind, written by John Szarkowski. The Museum’s title plays off the important book, “The Democratic Forest,” which came out in 1989. Although in her forward to this book, Eudora Welty mentions the human presence in Eggleston’s work, the figurative element is often absent though its remains have been left behind.

What is so interesting about Eggleston is the absence of the contemporary. In his world time has stopped, its movement stilled. The photographer seems to be traversing a graveyard of relics. We see the haunted Hopperesque “Rooming House” redolent of old glories, devoid of people. But we also see the formally stunning but incomprehensible “Viewers Aimed for Tourists” — without tourists. Eggleston’s Berlin photographs, especially of the Berlin Wall, are understandably famous, but, although the photographer conquered the new sights with his skills, to my mind he seems more comfortable — less of a tourist — in his native territory. In the South there is something surreal about the quotidian, and André Breton would rejoice at Eggleston’s search for the “marvelous.” How else could you describe a collection of tacky dolls perched on the hood of a Memphis Cadillac? Marvelous.