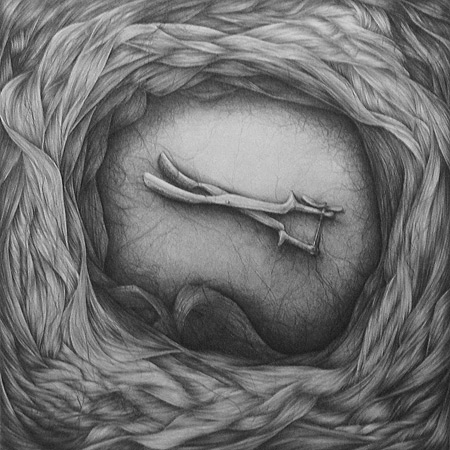 Triggered by a serious surgical procedure in her early childhood, Chicago-based artist Raeleen Kao’s graphite works and prints explore the fragility of the human body and subsequent impact that such fallibility can have on female body image. “Body Like a Barrow,” with its flawless representations of loaded imagery like nude figures, nests of hair and some sinister-looking surgical tools, also establishes Kao as a remarkable draftsperson.

In the works depicting figures and objects, the viewer is kept at an emotional distance, an observer of symbols and illustrations of the subject matter; in the five "Untitled" drawings, we are drawn into a more intimate experience and nuanced reading. Circles and spirals of scar tissue, sutures and braids still attached to scalps are tightly rendered, their edges blending into the negative space. Here, the blank page becomes an illusion to skin, and instead of being shown a narrative, we can imagine this visceral experience is our own.