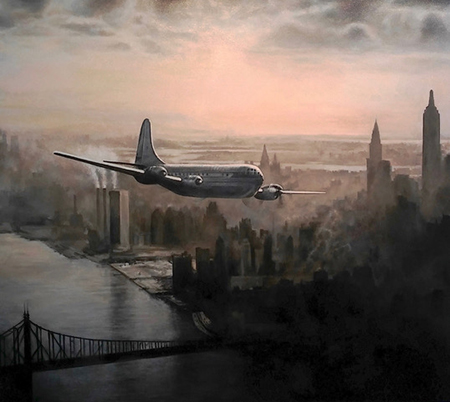 For the Greek Sophists there was no absolute truth, there were always two sides to every issue and wisdom came from being able to recognize the truth in both of them. We however live in a world of ever shifting “alternate facts” about history and events where people argue from strictly one side or the other and call it wisdom. Within that increasingly tilted arena of emotionalized opinion that blinds one eye in order to not see the other side of anything Laurence Gipe’s paintings have an even deeper resonance.

His big brooding chiaroscuro paintings in “Another Cold Winter” are the latest in Gipe’s examination of the visual rhetoric that pictured the industrial revolution as the 20th century’s economic and social salvation. Working this time from documentary and commercial archival photographs made from 1946 to 1950, he revisits the immediate postwar reconstruction era in Europe and America. In he resulting oil on canvas paintings, light and dark, beauty and insipient tragedy become disturbing conjoined twins.

The plane flying over the mist and smog clouded New York skyline in “Boeing 1949” is a gleaming arrow of triumphant military transport transformed into a peacetime passenger aircraft. As it approaches us it parts the darkness of the city below from a ruddy glowing sky above. Yet in its immediate wake we see three tall towers along the Hudson spewing thick white columns of smoke. The juxtaposition makes the historic changes of war and transportation echo with more recent events.

In “Thames 1947” Gipe focuses our eyes on the dawn-of-day promise of a pale pink morning sky over a gleaming silver river whose edges are spiked with bustling dark cranes. But the London skyline disappears into a grey fog at the horizon. We cannot see beyond the sharp silhouette of London Bridge to watch the city rise from the darkness of war because its skyline is shrouded by an orange tinted inversion layer so thick it seems rooted to the ground. In the foreground dark silhouettes of men in crisp suits and hats walk to work. No one on the bridge is looking at the city’s cloaked skyline. That view is directed into a cloud of burning coal that would become the “Great Fog” of 1952, killing 4,000 people outright and making 100,000 more ill. The image serves as a cautionary gift of time and the perspective of history.

In this age of instant communication painting is an outlier. Time is imbedded in it by the very labor of its making. Gipe uses his paintings to stimulate considered thought between a historic image and what it might signify to us now, given enough time. Richard Bruland’s abstract paintings however go another way, quite literally making time a physical and visible thing.

Bruland paints in layers; applying thick bright acrylic squiggles of color, one over another in intricate patterns that are allowed to dry and build up texture. He sands the ridges down to reveal the colorful accumulation of paint below then adds more paint. Layer after layer accumulates and is worn down again, until a vivid but complex surface of vibrating color remains that reads, finally, like an improbably dimensional shimmering atmosphere of color-flecked darkness or light.

This is a laborious, time consuming painting process that the artist celebrates in this series, entitled “WHOA!”. If it requires Bruland to work slowly, it asks the viewer to slow down as well. “Sombracito” reads like falling into a midnight blue chasm in the deepest part of the ocean. Light, bright colorful ridges at the top and bottom of the panel seem to be moving with us as we move forward and back, seeing details up close then losing them again in the deepening color in the center as we retreat. That can be a rewarding motion to repeat, a kind of visual inhale and exhale flooded with a shower of unexpected colors.